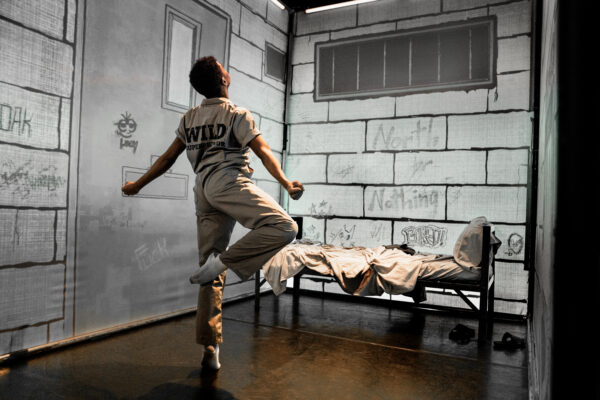 This special event is only open to John Jay Students, Faculty, and Staff. Please use your John Jay email to register in advance.

This John Jay exclusive behind-the-scenes look at the making of WILD: Act 1 will include a discussion with McQueen and his collaborators, led by Camille Massey, J.D., Founding Executive Director of the Sorensen Center for International Peace and Justice at CUNY Law School. This special event is only open to John Jay Students, Faculty, and Staff.

By exclusive arrangement, the first 40 John Jay registered attendees will receive a free ticket to the premiere screening of WILD: Act 1 in March 2021.

MORE ABOUT WILD
Inspired by Maurice Sendak’s classic children’s book, Where the Wild Things Are, WILD follows the journeys of several young Black and brown men as they struggle to break free from the systemic injustices that permeate their communities. WILD is propelled by dance and movement, in tandem with personal accounts, visual art, and original music, to transform the young men’s individual stories into a powerful reclamation of time, unity, space, and Black culture. WILD: Act 1 is filmed and edited by Black Iris Project collaborator Colton Williams, and features dancer Elijah Lancaster (Ailey II).

Jeremy McQueen (Director) is an award-winning choreographer, dedicated to story-telling rooted in experience and social engagement. His work aims to create spaces of comfort, solace, and connection through reflection—a sharing of observations of what is going on around him.

Born and raised in San Diego, California, McQueen is a 2008 graduate of The Ailey School/ Fordham University, B.F.A. in the dance program and has also trained in the schools of American Ballet Theatre, San Francisco Ballet, and Alonzo King’s LINES Ballet. McQueen has performed in Broadway’s Wicked and The Color Purple, the Radio City Christmas Spectacular, and numerous Metropolitan Opera productions.

L. Camille Massey, J.D. (moderator) is Founding Executive Director of the Sorensen Center for International Peace and Justice at CUNY Law School. She previously served as Vice President for Global Strategy and Programs at the Council on Foreign Relations in New York and has served in senior positions at Human Rights First and the International AIDS Vaccine Initiative, working in 23 countries with a concentration in Africa and Asia. She founded Cue Global, a consulting business that designed and implemented strategic policy, legal, advocacy, communications, and resource mobilization plans for global organizations. She was appointed a Human Rights Fellow at The Carter Center in Atlanta and worked with musician Peter Gabriel to help establish WITNESS, an international human rights organization supporting local groups in the use of video.

As a long-time board member of Breakthrough, Massey works on projects worldwide to stop violence against women and girls. She also serves on the board of Outright Action International and the advisory boards of Global Witness, the Center for Business and Human Rights at New York University and House of SpeakEasy, a literary nonprofit organization. Massey earned her J.D. from CUNY School of Law, and a B.S. from Syracuse University’s Newhouse School where she currently sits on the Advisory Board. She is a member of the Council on Foreign Relations, the American Bar Association, and the New York City Bar Association.

WILD: Act I is co-commissioned by the CUNY Dance Initiative (CDI) and the Gerald W. Lynch Theater at John Jay College, with support from The Howard Gilman Foundation, The Mertz Gilmore Foundation, Jerome Robbins Foundation, the SHS Foundation, the Harkness Foundation for Dance, and Dance/NYC’s New York City Dance Rehearsal Space Subsidy Program, made possible by The Andrew W. Mellon Foundation. CDI is produced by The Kupferberg Center for the Arts at Queens College.

Cultural, informational and visual arts presentations are made possible in part with funds allocated by Council Member Helen Rosenthal and the New York City Council.