Emmett Till, A New Opera 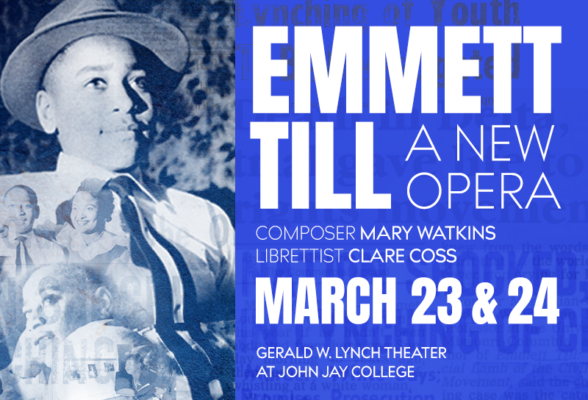 Emmett Till, A New Opera

Emmett Till, A New Opera, an exciting profoundly moving new opera by composer Mary Watkins and librettist Clare Coss premieres in a concert performance in association with Opera Noire International, and The Harlem Chamber Players on March 23-24, 2022 at the Gerald W. Lynch Theater at John Jay College, NYC,

Emmett Till, A New Opera tells the story of Emmett Till, a 14- year-old boy from Chicago who was tortured and lynched by two white men in Mississippi in 1955 for allegedly whistling at a white woman.  His mother, Mamie Till Mobley, made the courageous decision to show his mutilated face in an open casket at his funeral so that the world could see what had happened to her son.    Although his murderers were never convicted, her action caught the country’s attention and helped ignite the Civil Rights Movement.

Emmett Till, A New Opera, is based on Clare Coss’ prize-winning play, Emmett, Down in My Heart. For the opera, Clare Coss wrote the libretto and Mary D. Watkins composed the music. https://marydwatkins.com/operas/emmett-till-the-opera/

All attendees must be fully vaccinated against COVID-19 as defined by the CDC, wear a mask, and present both photo identification and a valid vaccine card.