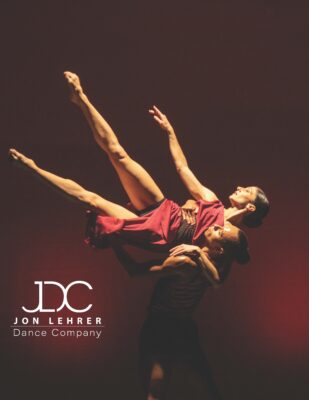 featuring the World Premiere of

with music by Composer Zeno Pittarelli

The CUNY Dance Initiative and the Gerald W. Lynch Theater at John Jay College announce a performance by Jon Lehrer Dance Company featuring the world premiere of Through The

Storm, a full company work set to an original score by composer Zeno Pittarelli. The program will include additional works, including four New York City premieres. The performance will take place on Friday, May 6, 2022 at 7pm at The Gerald W. Lynch Theater, John Jay College, 524 W 59th St, New York, NY. Tickets are $35 and are available at www.jonlehrerdance.com.

Jon Lehrer Dance Company (JLDC)’s trademark artistic, athletic, and accessible style is known for striking the elusive balance between art and entertainment. Taking the energy and chaos of a storm as inspiration, Through The Storm represents the past two years of struggle, hardship, but most of all the creativity and perseverance artists held on to throughout the pandemic. Visually stunning, evocative, and physically impressive, Through The Storm will be performed both internationally and nationally as part of JLDC’s 22/23 season following the premiere. The program also highlights the range of JLDC’s repertory with four New York City premieres (full details below).

JLDC is freshly off a successful four-week European tour where the company “captivated the audience with its grandiose choreography and the ensemble’s top dance performance without fail. Dynamism, elegance, acrobatics, power and an absolute passion for dance – these are the attributes that could be used to describe the performance.” (Zollern-Alb Kurier – Balingen, Germany)

A full company work set to an original score by Zeno Pittarelli.